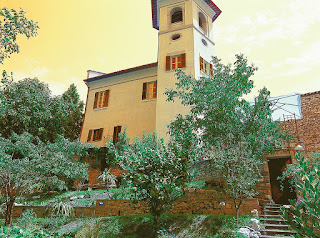 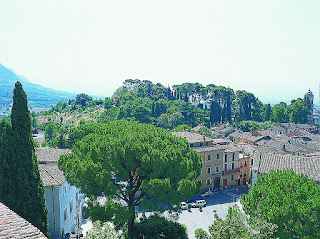 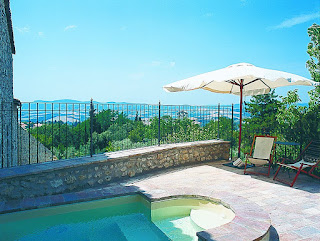 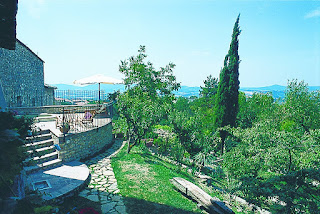 Follow us on twitter. Our new Italian property twitter home page offers you the opportunity to keep us with news and events in Italy and our general daily twits. Enjoy
at Friday, November 20, 2009 No comments:

This amazing section of Google Earth lets you explore The City of Rome as it was over 2000 years ago. Fly into Roma and see it from a birds eye view in the year 230 A.D. Tour the interiors of the famous buildings and visit the sites in 3d such as the Roman Forum, Colosseum and the Forum of Julius Caesar. Learn more about the Romans way of life. Brilliant...

(ANSA) - Maranello, January 12 - Ferrari on Monday officially unveiled its new car for the upcoming Formula One season which has been totally revamped to meet 2009 specification and regulation changes.

The car was first unveiled on Ferrari's website, which was immediately jammed by curious fans, and was later presented to the public at the Mugello circuit in Tuscany for its track debut. Driver Felipe Massa took the F60 for its inaugural spin around the track and later remarked how small it was, ''a bit like a Formula 3 car''. ''Let's hope it's as quick as it looks,'' he added.

Massa, who lost the 2008 world championship to McLaren's Lewis Hamilton by one point in the last race, said on his team's website that ''when you race for Ferrari and you take the car for its first run on the track it's always quite an important and emotional day''.

The new Ferrari, the first 2009 Formula 1 car to be presented, was named F60 after the number of championships the legendary Italian team has competed in, collecting 15 drivers' and 16 constructors' titles.

Designers said the car cost less than its most recent predecessors, in part because it uses last year's F56 engine, and was ''built to overtake''.

Because of its physical changes, the team has already nicknamed the new car 'the ferret' because of its elongated 'snout'. Last year's model was called 'the shark'.

Many of the changes in this year's car were aerodynamic and responded to regulation changes which went into effect in 2009, including those regarding suspension, the introduction of the 'kinetic energy recovery system' (KERS) and the return of 'slick', untreaded tires.

''This year everything is new, different and more complicated. The only thing that has not changed is our main objective of staying on top,'' Ferrari team principal Stefano Domenicali said at the presentation.

Ferrari has won eight of the last ten constructors' championships.

The track debut of the F60 was moved to Mugello because Ferrari's home track at Fiorano near Bologna was iced out.

During Monday's press conference, Domenicali said he did not envision Ferrari supplying motors to whoever buys the Honda team, which was put up for sale by the Japanese carmaker when it decided towards the end of 2008 to quit racing as a cost-cutting measure.

Speculation that Ferrari might supply the ex-Honda team with its engines arose after Ferrari's former technical director Ross Brawn, who moved to Honda last year, told the Italian sports daily Gazzetta dello Sport than he had been in contact with his old team to explore such a possibility.

Italy under Water as Rivers Threaten to Burst Banks

By: Lorenzo salvia
ROME – Snow fell in the north, rain and high winds lashed the south as Italians made more than 3,000 emergency calls to the fire service. Rome wasn’t the only place with weather problems. The head of civil defence, Guido Bertolaso, warned: “This is a critical moment but for the time being there is no alarm. It’s been raining and snowing all over Italy for 50 days with no let-up. After years of neglecting the territory, some of our chickens are coming home to roost”. There is serious concern about central Italian rivers like the Tiber, the Aniene and the Arno, which could break their banks. The situation has also affected today’s strike by the CGIL union federation. Trains will continue to run “so as not to worsen people’s inconvenience”. Public transport will be running normally in Rome and Venice, the two cities worst hit in the past few hours.

High water in Venice may delight tourists but no one else is amused: the level peaked at 118 centimetres. Water is also threatening Florence, where yesterday morning the river Arno flowing past the Uffizi had reached a level of 3.71 metres. Later, the situation improved and the water fell below danger level. A close watch is being kept on rivers all over central Italy and the situation is critical in the province of Arezzo, where many roads are closed to traffic.

Yesterday’s bad weather claimed three victims, in addition to the woman who died near Rome. At Barcellona Pozzo di Gotto in Sicily, an 80-year-old woman died of shock when she realised that her home was about to be flooded by rainwater. Heavy winds on the seafront at Reggio Calabria broke a branch off a tree and blew it onto a parked car. Sitting in the car was Antonio Laganà, 76, who had a heart attack and died. Still in the province of Reggio Calabria at Polistena, 55-year-old Vincenzo Valerioti died when a bridge collapsed while he was assisting a motorist. In Calabria and Campania, several trains stopped at Vallo di Lucania as a precautionary measure because of a landslip that blocked a total of 700 passengers. Cancellations and route variations affected a total of 29 trains travelling from northern Italy to Calabria and Sicily. Further problems plagued trains around Foggia, where the Bari-Turin intercity train was hit by lightning. Rail traffic was halted for an hour but there were no casualties. Infiltrations that discoloured the Frida spring led to suspension of the water supply to 25 municipalities in Basilicata.

In the province of Messina, a bridge over the Elicona torrential river partially collapsed. Heavy seas led to the cancellation of almost all ferry services between Sicily and the outlying islands while ferries between Messina and Reggio Calabria were also cancelled. Whirlwinds swept through the area around Agrigento and in the north of Italy, snow made life difficult. In the province of Salerno, 200 people had to leave their homes when a torrential stream broke its banks. They were put up in local hotels. Schools in Bolzano were closed. At Gallio in the province of Vicenza, a 13-year-old girl was struck by a large block of snow that detached itself from the roof of a hotel. Exceptional snowfalls mean that the hunting season for roe deer and red deer opens today in 15 of the 20 districts of Trentino. After Milan’s Linate airport was closed, Mr Bertolaso asked the SEA management company to “apologise to air travellers”. SEA’s reply was: “Unlike Malpensa, Linate has only one runway. Landings and take-offs have to be suspended while it is being cleared of snow”.