It's all going on at Monte Santa Maria Tiberina! Brad Pitt, a giggle, giants, singing and dancing, a bit of crying, magical beasts (and where to find them), literature, classical music and blues. Something for everyone!

Monte Santa Maria Tiberina is a hilltop village that was once an independent state, one of two places in Europe where duels were legal. Located in the Upper Tiber Valley it has Etruscan roots but a Medieval heart, with narrow streets, historic stone buildings and a panoramic position with unparalleled views of the surrounding area. Close to the border of Umbria and Tuscany it was part of the latter right up until 1927. It therefore enjoys the cultural and gastronomic pleasures of both regions, with truffles, porcini mushrooms, excellent olive oil, fantastic wines, and traditionally-made cheeses and salamis.


In the next couple of weeks there is quite a lot going on. From the 16th of August there is a week of films starting at 9.30pm. Shown in the gardens the titles include 'la la land', an Italian comedy called (in English) 'I can quit whenever I want', the Stephen Frears’ film about Florence Foster Jenkins, 'Fantastic beasts and where to find them' (the Harry Potter prequel so to speak), 'Allied', a Romantic thriller with Brad Pitt, the multi nominated 'Manchester by the Sea' and Spielberg's BFG. 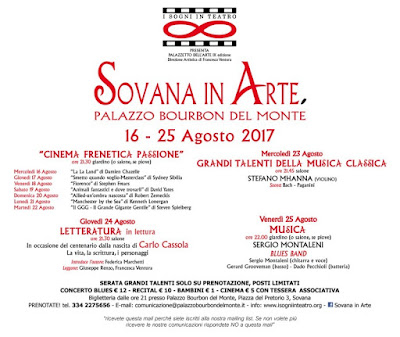 There is also music on the 23rd and 25th; classical violin and blues respectively with the evening in between dedicated to the writer Carlo Cassola, an influential Italian novelist and essayist.


There's quite a choice and something to suit all tastes!


Monte Santa Maria is well worth a visit anyway. The Bourbon palace, built in the 1500’s, dominates this tiny village along with a crenelated castle. The pretty church is dedicated, as the name of the village suggests, to the virgin Mary, and has an interesting baptismal stone font and a Bourbon family chapel. The procession of the Ascension, re-enacted for centuries on the 15th of August, honours the virgin Mary, the protectress of the village. There are several food festivals throughout the year, dedicated to the area's primary products of mushrooms, truffles, chestnuts, and roast pork.
For more information - www.isogniinteatro.org or call +39 342 275 656 ​