Interviewing one of our buyers

Buying a casale in Umbria is a fantastic opportunity to be in a place that is a sanctuary of rest and relaxation. In Umbria one can enjoy the beautiful countryside, amongst farmer’s fields, hills and Medieval villages. Some people’s aim is to bring some century-old rural homes back to life with the aid of modern technologies. Former anthropologist Marian Chenery who lives near Umbertide said:” When I saw this house I fell in love. I felt it was going to be the perfect space with the right energy for me to continue along my life journey and perhaps share it with others”. Marian bought a house through our agency in April, the central location of the rural complex was the key. At the top of a fading range of fields, the property rises up like a sentinel. “I’m from Boston, Marian continues, but the concentration of pollution that afflicts big cities convinced me to search for a better, healthier place where I could live my life. Here in Umbria I’ve found the right balance between traditions and modernity and between rural wisdom and technology. Another important factor is the proximity of the house to major regional centres where I can take part of the city life, enjoy shows, art exhibitions and antique fairs. I love the location and the people in the country know the secrets of living according to nature, using one of its primary elements masterfully: the land. During my search for the ideal house, I was totally enchanted by the beauty of this compound. The property was renovated using traditional materials, an entire thatched wall was preserved and areas in ruins that had old bricks covered in lime were restored. The building is now responding to the criteria of harmony and functionality. The bedrooms and the large living area with an antique fireplace have crafted antique terracotta floorings and beamed ceilings made of unpainted water treated wood. I intend on taking up this quest of simplicity sharing the enchantments of this place”.
at Thursday, June 30, 2011 No comments:

MONTE SANTA MARIA TIBERINA, Italy — As we turned off the main street onto an unpaved local road, I glimpsed a stone tower jutting up from a distant hill. It seemed impossibly high from our vantage point — were we really headed up there? Where else could this road lead?
It was late May and I was traveling with two friends to a destination wedding in the tiny town of Monte Santa Maria Tiberina, about halfway between Rome and Florence. The happy couple had rented a villa there for about 18 guests and would be getting married on the grounds.
As our little car powered its way up the mountain, the altitude started to make sense. Earlier in our drive from Rome to the Umbrian countryside, we had gasped from afar at the beautiful hilltop town of Orvieto as we sped up the A1, the main north-south highway in Italy. Breathtaking views of stone buildings perched above green valleys would be repeated throughout our five days in Umbria, which boasts beautiful landscapes, terrific food, impressive art and architecture, and a wealth of history.
Umbria plays the subtly gorgeous girl-next-door to its more famous celebrity neighbor, Tuscany. Our villa in Monte Santa Maria Tiberina, which the bride found through Homeaway.com, was the perfect base for exploring this region known as "the green heart of Italy."The villa was a stunning rehab of a 16th-century home once owned by the Prince of Milan. It had several bedrooms, spacious common areas, Internet access, a gigantic kitchen with modern appliances, and a two-tiered backyard with a pool overlooking the hills. (For smaller parties or shorter stays, try an "agriturismo" — essentially an Italian bed-and-breakfast.) One of my favorite day trips was to Assisi, home of St. Francis (San Francesco), Italy's patron saint. The immense basilica built in his memory is a major pilgrimage site — his remains are on the lower level — and a marvel of ornate frescoes, including Giotto's "The Life of St. Francis." Dress modestly (no shorts or tank tops) or you'll be turned away.
The town also boasts a medieval fortress, other churches (St. Clare is buried in one) and many upscale shops and eateries. Ironically, while St. Francis renounced his worldly possessions in a search for God, you can buy all kinds of saintly keepsakes — including a mini-version of his signature sandal on a keychain. We also stopped in nearby Perugia. The Umbrian capital is a university town and home of the Galleria Nazionale, the region's main art museum. History buffs might seek out Etruscan treasures like the municipal well and Porta Marzia (Mars Gate), both of which date to the 3rd century B.C.
My guidebooks had hyped the city's main piazza and fountain but, while perfectly nice, they weren't all that exciting. The pedestrian-only Corso Vannucci is great for strolling and people-watching; it's lined with shops and cafes and has a nice overlook at the end. Just outside the city is San Sisto, where Perugina chocolate is made. You can tour the factory where it manufactures its signature Baci ("kisses") hazelnut chocolates. Each fall, Perugia hosts the Eurochocolate festival.
On another day, as I ran errands with the bride in charming Citta di Castello, our friends drove to Gubbio. Turns out they just missed the town's biggest festival, the centuries-old Corso dei Ceri (Race of the Candles). Held each May 15, thousands watch as teams carry giant wooden dowels ("candles") representing saints in a foot race through town. Still, our friends said the town remained draped in flags and overrun by people in colored costumes — perhaps gearing up for the next weekend's annual festival, a crossbow competition with the nearby town of Sansepolcro.
I've since realized that we should have stopped in Orvieto — and not just because of its famous native white wine, Orvieto Classico. Its cathedral (duomo), whose facade is covered in brightly colored mosaics, is universally regarded as one of Italy's most beautiful. But no matter which town you visit, the real enjoyment comes from soaking up the atmosphere: Wandering narrow streets and winding stairways, treating yourself to coffee or gelato at an outdoor cafe, admiring scenic vistas and architecture, or shopping at farmers markets that offer everything from seasonal produce (fresh truffles!) to flowers, cheese and meats.
I was nervous about driving in Italy, but I'm glad we rented the car; train travel among these cities is not efficient. Just remember to keep right on the highway unless you're passing. You have never truly been tailgated until you accidentally stay in the left lane too long on the A1. Navigating was fairly easy: Follow the signs to the city you want, then follow the bulls-eye "centro" symbol to get to the town center. Some parking areas are below the town centers and offer escalators, elevators or funiculars to take you up.
Also, practice driving a stick shift before you get here. It's difficult and expensive to rent an automatic; if you're not good with a clutch, you'll hate stopping and starting on these hills, especially in traffic. A fine surprise along the A1: The unappetizingly named Autogrill rest stop eatery chain was terrific. Pasta bar. Carving stations. Melon and prosciutto. Fresh mozzarella. Glasses. Silverware. Even single-serving bottles of wine bottles (for passengers, I'm sure). The New Jersey Turnpike should be so blessed. On our drive back to Rome, we took a slightly different route and said farewell to Umbria with a stunning view of Todi. We then dropped off the car the airport and took a taxi back to Rome for a whirlwind 10-hour sightseeing jag. After watching our cabbie maneuver through hordes of urban scooter riders, I was so grateful we ditched the car. Stick-shift expert or not, when in Rome ... let Romans do the driving.
By KATHY MATHESON
at Tuesday, June 28, 2011 1 comment:

The district of Borgo XX Giugno in Perugia, is named for the disastrous events of 20th June 1859, when Swiss guards of the papal army massacred Perugian supporters of the Risorgimento here.
at Monday, June 20, 2011 No comments: 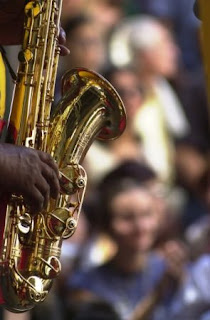 The 2011 edition of Umbria Jazz will be held in Perugia from July 8th to17th and it will be one to remember.

Here is a small preview of artists who will be on stage during the festival:

Also do the names Ahmad Jamal, Hiromi Uehara, Sergio Mendes, Michel Camilo, Chucho Valdes, Anat Cohen, Tia Fuller, Dee Alexander and Caro Emerald mean anything to you? What do they have in common besides being some of the most inspired and talented musicians of our era, who changed jazz forever? Well, they will all play at the Umbria Jazz festival!

Put this information together and you will have an exceptional event, something magical and yet deep that you don't want to miss.

To learn more you can visit the official Umbria Jazz website