The world owes a lot to General Garibaldi 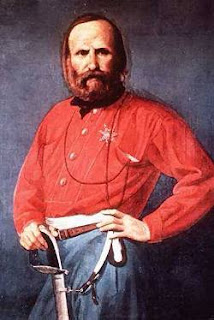 The example of Garibaldi displays those which adorn every pure and honest, leader of troops.
How much the world owes him, for his disinterested career and his devotion to the cause of freedom, is difficult to say.What many people may not know however is that it is thanks to the rugged hero of Risorgimento movement if we can wear jeans today!
A Times correspondent who was in the South of Italy while General Garibaldi was busy uniting the country wrote- 'I had my first interview with the disinterested and brave liberator of Italy in his red shirt, a dirty pair of jean trousers and worn out boots'.
It must be remembered that this patriot was originally a sea captain on the Ligurian coast who dressed, as his colleagues did, in trousers made of that indestructible blue cloth named 'Blue de Genes', blue of Genoa, from whence the appellation, blue jeans. The name 'Blue Jeans' infact comes from 'Blue de Genes” (blue of Genoa). Interestingly it was this name that was given by the locals to the blue textiles used to manufacture sails, the date of birth of the Blue Jeans goes as far back as 1567.
However blue jeans as a fashion phenomenon was to lie dormant for another while, and surely the leader of the Mille would turn over in his grave to see teenagers, young girls and grown women, instead of port workers, wearing them.
Garibaldi was also the unwitting sponsor for other merchandise, especially in England where the ladies sported blouses modelled on the Red Shirts, called 'Garibaldis'. There were also Garibaldi tie pins for the men. Besides the well-known Staffordshire figures of Garibaldi on horseback, there were Garibaldi silk scarves and bookmarks with portraits, and perfumes named after the hero were described as 'irresistible'. There were sweets known as 'Garibaldi balls' and raisin-studded 'Garibaldi' biscuits which are still enjoyed throughout Europe today.
Moreover the craze for Garibaldi produces may poems in honour of the brave general- 'Memoires of Garibaldi' etc... we definitely owe a lot to the 'Hero of the Two Worlds'!!
at Monday, May 03, 2010