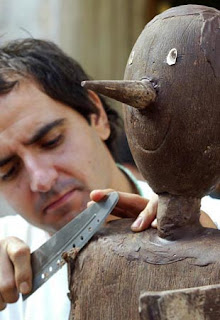 There are few things I can think of that make travel more pleasurable than food – whether it’s trying something new, or tasting an old favorite in the place where it was born. And because so many people around the world are so passionate about chocolate, it shouldn’t come as a surprise that Perugia’s annual Eurochocolate festival draws countless visitors from all corners of the world.
Held in October each year since 1993, Perugia’s Eurochocolate chocolate festival has been steadily growing in popularity. Today, it is one of the most important chocolate festivals in Europe and features everything from theatre and music performances to cooking demonstrations and chocolate art exhibits. A highlight for most visitors is the collection of outdoor chocolate sculptures; between all the chocolate used in the artwork and all the chocolate being sold by vendors outdoors, if the weather is warm you won’t be able to walk through town without breathing the chocolate-scented air.
Each year, Eurochocolate has a different theme – in past years it’s been things like “City of Chocolate,” “Chokolate Revolution,” and “Chocolage.” The latter theme was meant to speculate as to the evolution of chocolate, and the promotional photographs included a woman using a chocolate bar as a mobile phone!
Perugia, the capital and largest city in Umbria, was the sole site of Eurochocolate until 2000, when other cities in Italy saw what a great idea it was and decided to get in on the act. Many of those cities have broken away from the Eurochocolate umbrella and have started their own chocolate festivals (such as Turin’s annual chocolate festival, CioccolaTÒ), but one city which remains affiliated with Perugia’s Eurochocolate festival is Modica – their chocolate festival is held each year in March.
at Monday, October 11, 2010