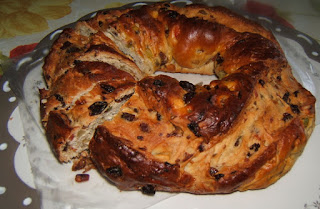 San Costanzo, martyred in the third century and one of three patron saints of Perugia, was buried (according to legend) outside the walls of Roman Perugia, today an area inside the medieval walls, near the church of San Pietro. The feast of San Costanzo, on January 29th, is celebrated in Perugia with a special mass in the Cathedral (always an integral part of a town's celebration) and the Fiera of San Costanzo. The fiera (or large open market) is also integral to celebrating the feast day (see October 5th - Assisi). Perhaps because at one time (until the early 1970's) much of the Italian population lived on the land with only rare visits to town, on foot or by mule. Most were subsistence-level farmers or sharecroppers working for landowners, with very little cash on hand in the home. A saint's feast day was a special event, a time to wear one's best clothes (meticulously clean, if not elegant) and go into town for mass. It was a time to see others, to socialise in the main piazza, and perhaps - in honour of such a special day - to spend a few precious lire. One booth would always have (and every market still has many of these booths) dried fruits, semenze (pumpkin and sunflower seeds to munch on) and nougat - special treats for all. The market fills Borgo XX Giugno, the area near the legendary burial site of San Costanzo.


For this feast too, a special bread is a highlight, il torcolo di San Costanzo, a ring-like cake made with pine nuts, raisins, and candied fruits. A city document, from 1595, even defines the required ingredients. An incision of a pentagon is made on the bread to represent the five city gates of Perugia. For the past few years, the city of Perugia has celebrated this feast with a competition among all the area's bakers for the production of the best bread. In the morning, all the citizens are invited to join in a "comparative tasting". The bread was once eaten only on the feast of San Costanzo and made only in the home, but today every Perugino has his favourite baker and the bread is available throughout the year. Another tradition, lost until a few decades ago, is for an engaged couple to visit the Church of San Costanzo and stare at the Saint's image. If the Saint winks, the couple will be married within the year. If not... be prepared for a wait!
at Wednesday, January 26, 2011