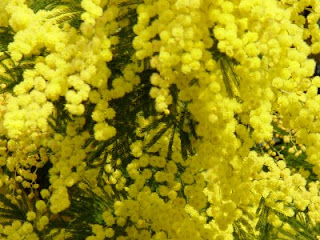 The 8th of March is International Women’s Day, a festival which will be celebrated around the world. Here in Italy this very popular festival is called  La Festa della Donna. In 1946 the Unione Donna Italiana (Italian Woman Union), whilst preparing for the celebrations of the 8th of March, decided to choose an object to symbolise the event. The choice fell on the bright yellow flowers of the Mimosa, which is in blossom at the beginning of March, and since then this plant has become the symbol of La Festa della Donna. The success of the Mimosa as an emblem of Women’s Day is due not only to the fact that it blossoms at this time of year, but also to its bright yellow color, a symbol of vitality and joy which represents the passage from death to life. In addition to this, despite its fragile look the Mimosa is, appropriately, very resilient! It has become a tradition that men will buy small sprigs of Mimosa which they will then offer to women, and part of the proceedings from the sale go to support projects related to women’s causes, such as shelters for women subject to violence, breast cancer research, or co-operatives run by women in Third World Countries. The Mimosa belongs to the Acacia family and the most popular variety grown here in Italy is the Acacia Dealbatawhich, given the right conditions, grows to a height of around 20-30 feet. Originally from Tasmania, this beautiful tree has yellow flowers which are very small and bunched together in bright fluffy pompons.  The majority of Mimosa trees are cultivated in Liguria on the terraces facing the sea. Here the climate is ideal for these plants which, in order to grow well, should never be subjected to temperatures below zero and must be sheltered from the wind. The Coldiretti (Farmers' Union) claim that the Mimosa industry is beneficial to the environment for two reasons: firstly the trees are cultivated according to eco-sustainable principles, and secondly they are grown on agricultural land that would otherwise be abandoned and subject to erosion. To keep your Festa della Donna Mimosa flowers fresh for longer you should cut off the lower leaves with a sharp knife and put them in vase with tepid, not cold, water to which you have added a couple of drops of lemon juice. It’s important to keep the flowers in full light but well away from any heating source as the Mimosa doesn’t like a dry environment. Finally, I’d like to share with you a few words that I’ve just read on an Italian website dedicated to Festa della Donna,which were written by someone called Giuseppe: Senza le donne finirebbe il mondo: mancherebbe la dolcezza, mancherebbe l’amore di una mamma, mancherebbe il sorriso di una fanciulla, mancherebbe la voglia di vivere… Grazie Donna! Auguri Donna! (Without women the world would end: there wouldn’t be sweetness, there wouldn’t be the love of a mother, there wouldn’t be the smile of a girl, there wouldn’t be the desire to live… Thank you Woman! Best wishes!)
at Monday, March 12, 2012

This post was interesting and I enjoyed reading it. Hope I discovered it earlier. Italy is one of my dream place to visit. Hope I could make it possible. Anyways, A lot of thanks for sharing.