The Villa of the Monsters in Bagheria 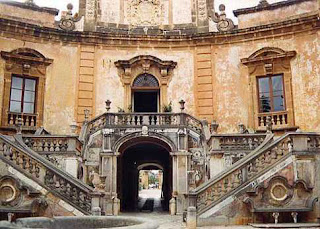 Bagheria, once the playground of rich aristocrats from Palermo, hides a fantastical secret. At the heart of the urban sprawl - amidst traffic chaos, unremarkable modern tenements and the neon facades of twenty first century commerce - lies the Villa Palagonia. From the entrance gate, the only clue to its peculiar existence is the pair of bizarre stone guardians leering at the unwary passer-by.
This most unusual of Sicilian villas was built in 1715 for the fifth Prince of Palagonia, Don Ferdinando Gravina. The beautiful baroque summer residence owes its notoriety to the Prince’s grandson, Francesco Ferdinando, who commissioned the sculptures and ornate decoration. The gruesome-twosome at the entrance are only a hint of what lies beyond. Having decided to ignore their mocking stare, we passed through the flower-covered gate house and strolled the gravel drive towards the villa’s elegant curves. Aware of an uncanny sensation of being watched, we turned to confront the full menagerie. What bitter phantoms of the mind could have given birth to such a panoply of characters?

Mythology and reality clash to produce disfigured hybrids: a hunched-back gnome grimaces towards a scowling cherub; a periwigged aristocrat bids music from a courtier; a horned dragon with a human face watches as a young noble dances on the head of a gargoyle. The statues line the perimeter wall, but the passage of time has depleted the original number, thought to be over six hundred in total. Theories abound as to why the seventh Prince felt compelled to populate his garden with so many grotesque caricatures.
Francesco Ferdinando may have been railing against Mother Nature who had not blessed him with Hollywood looks. It seems his wife found solace in the arms of more than one lover and the rumour spread that each new sculpture was born of jealousy; a satirical jibe from the cuckolded husband. Prince Gravina has also been portrayed as an eccentric loner obsessed with esoteric pursuits, which would account for some of the more obscure ancient Eastern references in the sculpture. The German writer, Johann Wolfgang Goethe, was convinced the answer to our conundrum lay in madness – a mind that gave free rein to a passion for deformity.

Much of the villa’s legendary fame comes from the accounts of travellers such as Goethe. His classical soul was very scathing of the overwrought sculpture and ornamentation. Patrick Brydone, an English contemporary, was more tolerant of the Prince’s fevered imagination: ‘… a man of immense fortune, who has devoted his whole life to the study of monsters and chimeras, greater and more ridiculous than ever entered into the imagination of the wildest writers of romance or knight errantry.’
Henry Swinburne, the eighteenth century travel writer, was one of the first to note how the softness of the stone would see the Prince’s legacy gradually erode into dust – a fate he was not inclined to lament: ‘I was in a hurry to leave this world of monsters, which almost made me giddy.’ Our modern perspective, saturated with imagery, is more inclined to celebrate the unusual and welcome anyone brave enough to step off the well-trodden path.

During the Prince’s life-time and in the years following, the local women were afraid to look the statues in the eye, fearful that their glance would have unfortunate consequences for any unborn offspring. All deformities at birth were blamed on the evil influence of Francesco’s gargoyles. Prior to Patrick Brydone’s visit, the local government had even given serious consideration to demolishing the statues but, as the writer points out, Gravina was thought to be so inoffensive and charitable that such an action would have broken his heart.
The curse was to strike again many years later in 1948 when the carabinieri were pursuing men associated with the bandit Salvatore Giuliano. Shots were fired into the dark shadows of the Villa’s garden where the men were hiding; daylight revealed that the five-eyed goblin at the entrance was glowering down at the dead body of a policeman.

Leaving behind the statues along the perimeter, we passed a stone bench at the foot of the grand staircase leading to the main entrance of the house. Prince Gravina, forever frozen in time, stares out blankly from the frieze above the bench - a location much favoured by the Magnum photographer, Ferdinando Scianna, whose most famous image of the Argentinean writer, Jorge Luis Borges, was taken on this very spot.
The stairs flank the archway that gave access to horse and carriages, arriving for one of the many balls hosted by the Prince’s wife. They sweep elegantly to a balustraded platform in front of the grandiose doors. A bocca della verità (mouth of truth) gapes forebodingly, hungry to be fed with the anonymous misdemeanours of the local aristocracy!

The vestibule is decorated with trompe l’oeil frescoes depicting the Labours of Hercules and the doorway to the spectacular mirrored ballroom has a sobering message for all who enter, which translates as: See your reflection in the glass and contemplate in its magnificent splendour the image of mortal fragility that it expresses.
Sadly, the glass has been so mottled with age that it’s difficult to contemplate any reflection – the true fragility of time. The ceiling mirrors, however, are still intact and the magnificent marbled walls and floors make it a short leap of the imagination to conjure up the decadent delights of the past. We can even see Francesco Ferdinando huddled in a corner, with a jealous eye on those more favoured in looks and personality. It is still rumoured that his eccentric decoration extended to the furniture; plushly covered seats hid spikes to surprise the unwary.

Hindsight could hail the villa as a surrealist masterpiece worthy of the likes of Dalì. One famous local artist, Renato Guttuso, now buried in the grounds of his own museum in Bagheria, took inspiration from the Prince’s sculptures. Best known in the United Kingdom as the illustrator of Elizabeth David’s Italian Food, he painted one of the archways bedecked with statues looking down on the equally prickly pads of an Indian Fig. His painting is a lasting testimony to our enduring fascination with Francesco Gravina’s imagination.
at Thursday, April 12, 2012