For over a century the Venice Biennale has been one of the most prestigious cultural institutions in the world. Since its foundation in 1895 it has promoted new artistic trends and organized international events in contemporary arts.  Events includes the Film Festival, the Art and Architecture Exhibitions, the Festival of Contemporary Music, the Theatre Festival and the relatively recent Festival of Contemporary Dance.

The Biennale has remained an indisputable artistic focal point through the last century and up to the present day.  Initiated on April 19th 1893, as part of the municipality of Venice’s contribution to the silver anniversary of the marriage of King Umberto I and Queen Margherita of Savoy, the city proposed to hold a national biennale.  Additionally, this exhibition coincided with the celebrations of the newly formed Italian state.  Shortly after its establishment the structure of the exhibition was reorganized from a national exhibition to an international event.  The layout of the exhibition in the 20th century was characteristic of how the space was used as it was influenced by the Salon exhibition styles in Paris.  The Biennale was set up with a central exhibition building consisting of connected galleries of international and national themed rooms.  Gradually the character of the exhibition changed with stronger emphasis on national identity in later Biennales.

The 55th Biennale opened on June the 1st and roughly 300,000 visitors are expected before the pavilions are closed on the 24th of November. There are a record number of 88 national pavilions taking part in the festival this year with shows from 88 countries, more than ten of whom, including the Vatican and the Bahamas, are participating for the first time.

Works are shown in the national pavilions in Venice's Giardini and in the city's former arsenal, as well as in palazzi and churches spread around the islands of the lagoon. 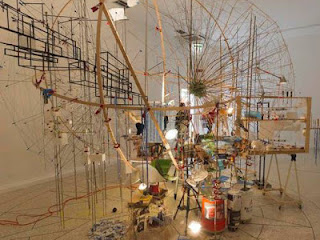