Italy is giving away more than 100 historic castles, farmhouses and monasteries for free in an effort to breathe new life into its disused public buildings. Under a new scheme unveiled by the country's government run State Property Agency, 103 ancient buildings will be up for grabs to entrepreneurs who promise to transform the locations into tourist destinations.
The disused properties are situated along eight historic routes running the breadth of the country and the nearby islands of Sicily and Sardinia. It is hoped that the initiative will create a series of new facilities for the hundreds of hikers, cyclists and pilgrims who use the routes each year.
The project aims to promote and support the development of the tourism sector and the goal is for private and public buildings which are no longer used to be transformed into facilities for pilgrims, hikers, tourists, and cyclists.
The scheme, which is backed by Italy's Ministry of Tourism, calls on applicants to submit a proposal outlining how they intend to transform their preferred building into a tourist attraction  and the eventual transformation will have to be paid for by the applicant. Specific preference will be given to those aged under 40. 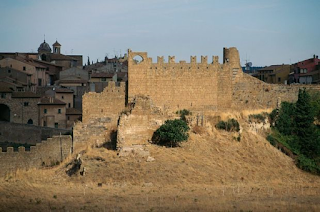 Successful applications will then be awarded rights to the property for nine years, with the option to extend for an additional nine years.
The deadline for applications is June 26 and work will be expected to commence next summer and a further 200 buildings are scheduled for inclusion in the project over the next two years.
This is the latest initiative to emerge from Italy as part of on-going work to regenerate the country's rural areas.
at Friday, May 19, 2017