Villa Palmieri: the villa where the famous Boccaccio's novel, "The Decameron", is set 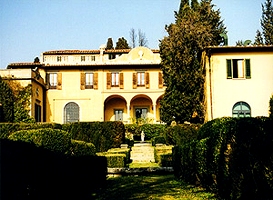 The Villa Palmieri, is a patrician villa in the picturesque town of Fiesole that overlooks Florence, Italy. The villa's gardens on slopes below the piazza S. Domenico of Fiesole are credited with being the paradisal setting for the frame story of Boccaccio's Decamerone.
The group of storytellers stay in two villas above Florence which have been determined to be Villa Palmieri in Fiesole, and the Podere della Fonte, or the so-called Villa del Boccaccio near Camerata. Villa Palmieri is open to visitors, and it’s gardens during Boccaccio’s time are described in great detail in The Decameron at the beginning of Day Three.
“Whereupon they went to a walled garden adjoining the palace; which, the gate being opened, they entered, and wonder-struck by the beauty of the whole passed on to examine more attentively the several parts.
'It was bordered and traversed in many parts by alleys, each very wide and straight as an arrow and roofed in with trellis of vines, which gave good promise of bearing clusters that year, and, being all in flower, dispersed such fragrance throughout the garden as blended with that exhaled by many another plant that grew therein made the garden seem redolent of all the spices that ever grew in the East.
'The sides of the alleys were all, as it were, walled in with roses white and red and jasmine; insomuch that there was no part of the garden but one might walk there not merely in the morning but at high noon in grateful shade and fragrance, completely screened from the sun.
'As for the plants that were in the garden, 'twere long to enumerate them, to specify their sorts, to describe the order of their arrangement; enough, in brief, that there was abundance of every rarer species that our climate allows.
'In the middle of the garden, a thing not less but much more to be commended than aught else, was a lawn of the finest turf, and so green that it seemed almost black, flanked with flowers of, perhaps, a thousand sorts, and girt about with the richest living verdure of orange-trees and cedars, which showed not only flowers but fruits both new and old, and were no less grateful to the smell by their fragrance than to the eye by their shade.
'In the middle of the lawn was a basin of whitest marble, graven with marvellous art; in the centre whereof--whether the spring were natural or artificial I know not--rose a column supporting a figure which sent forth a jet of water of such volume and to such an altitude that it fell, not without a delicious splash, into the basin in quantity amply sufficient to turn a mill-wheel.
'The overflow was carried away from the lawn by a hidden conduit, and then, reemerging, was distributed through tiny channels, very fair and cunningly contrived, in such sort as to flow round the entire lawn, and by similar derivative channels to penetrate almost every part of the fair garden, until, re-uniting at a certain point, it issued thence, and, clear as crystal, slid down towards the plain, turning by the way two mill-wheels with extreme velocity to the no small profit of the lord.
'The aspect of this garden, its fair order, the plants and the fountain and the rivulets that flowed from it, so charmed the ladies and the three young men that with one accord they affirmed that they knew not how it could receive any accession of beauty, or what other form could be given to Paradise, if it were to be planted on earth.”
The villa was certainly in existence at the end of the fourteenth century, when it was a possession of the Fini, who sold it in 1454 to the noted humanist scholar Marco Palmieri, whose name it still bears. In 1697, Palmiero Palmieri commenced a restructuring of the gardens, sweeping away all vestiges of the earlier garden to create a south-facing terrace, an arcaded loggia of five bays and the symmetrically paired curved stairs that lead to the lemon garden in the lower level. The often-photographed lemon garden survives, though postwar renovation stripped the baroque decors from the villa's stuccoed façade. Villa Palmieri has suffered from having been a 'show-place' and the alterations of many owners to suit the fashions of their day, so that little of its original character remains.

Villa Schifanoia was built over the remains of the ancient Villa Palmieri. The main core of the villa, of 15th-century origin, belonged to the Cresci family until 1550. It has changed hands many times over the centuries, and seen many alterations and additions, such as the family chapel, built in the mid-19th century, and the large gate from which the avenue leads through the garden and up to the main entrance of the villa and a small two-storey outbuilding known as la villetta. In 1927 the property passed into the hands of Myron Taylor, the United States Ambassador to the Vatican during the pontificate of Pope Pius XII. Taylor restored the villa to house his own art collection and also laid out a beautiful Italian-style garden on the generous stretch of land on the south side, divided into three elegant parterres edged with box hedges and arranged around a series of small fountains. The beautiful formal garden is enlivened with statues and other stone decorations, small pools and fountains, of which the one on the upper terrace is skewed off the main axis. In 1986 the villa was bought by the State and converted into a European University Institute.
at Thursday, June 24, 2010