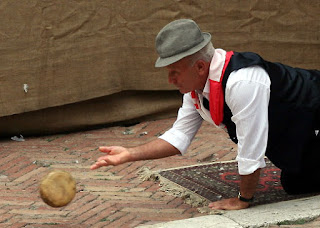 In challenges requiring precision and deft skill, it could be said that all it takes is a flick of the wrist, yet watching the participants in this engaging cacio-hurling contest, I think it would be safe to say that it's also worth knowing your cheese?
At the Fiera del Cacio in Pienza, the event is held on the 1st Sunday of Sept, the real attraction is a traditional game of rolling-a-round-of-cacio-toward-the-spindle. The game is simple enough- men at one end, spindle at the other. Points are tallied according to where the cacio landed. All of the elder players are a thrill to watch as they just seem to have that added flair honed into their strategy.
The saying is... the true pecorino is made in Pienza! During the festival you can find all along the main street and in between the alleys branching off, numerous stands of pungent pecorino. Thick strands of pici pasta, chickpea flour, thin anise-flavoured wafers called brigidini, salumi, olive oils, even a cart selling nutella-filled crepes hot off the griddle... all of the things that make Italy such a divine place for the senses are present to amplify the event. Cheese anyone?
at Thursday, August 19, 2010