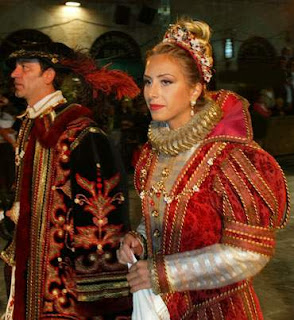 Città della Pieve, a Perugia pearl about 90 kilometers north of Rome, has its own frolicking version, highlighted by an archery competition and, on a lighter note, flour tossing.
The Palio dei Terzieri, held on the last Sunday of August, gives Città della Pieve its summer flavour. It is an old Medieval festival- the three town's terzieri (boroughs) Borgo Dentro, Casalino and Castello parade through the streets with about 700 personages in costume, inspired by the works of the most famous figure whose birthplace was Città della Pieve: Pietro Vannucci, known as the Perugino.
Castello symbolises the ancient knight class, Borgo Dentro the middle class, and Casalino or Popolino, are both diminutive references to lower classes.
Medieval towns were strictly divided along class lines, and these distinctions were prevalent until recently. On the morning of the Palio, townswomen dressed in velvet period garb parade past shops and storefronts on their way to the headquarters of the terziere to which they belong. By 3 p.m. the procession begins, led by members of the previous year’s Palio winner. The competitions themselves, which follow the parade, are anything but simple. Among other tests, archers must strike the spinning outline of a bull- adjusted to move at three speeds. While shooting, they must deal with their nerves and whispers and shouts from opposing terzieri. When a winner is declared, organised mayhem begins, with dames, pageboys and the irreverent popolani dancing and shouting.
After the archery contests come the flour wars. Members of the terzieri “attack” one another with small bags of flour, which in a matter of minutes leaves the elegant corso looking like a cross between a mountain slope and a madcap kitchen. The run-up to the Palio sees the opening of the town’s taverna, informal restaurants with local cooks.
at Monday, August 23, 2010