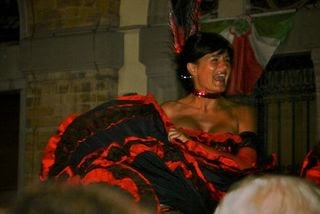 Umbertide had their Ottocento festival over the weekend and it was a rousing good time, the Umbrian town turned into a stage for one of the most interesting historic commemorations of our region. Forgoing the whole Middle Age theme, Fratta (the original name of Umbertide) has embraced the roaring 19th century, a century of great social and political changes which gave birth to the modern era and to a time marked by huge and significant transformations in communication, labour and culture.
The 19th century was a time that deeply affected life in Italy and in the world, including the microcosm of Umbertide which, through evocative scenery and walkers-on wearing period costumes, re-lived the exciting moments that characterised the Italian Risorgimento with all the suffering that came with it. The many initiatives in the programme were grouped into sectors which were mainly cultural events (exhibitions and conferences), entertainment (plays, ballet and music and folk dances) and gastronomy.
This is a festival in every sense of the word- lavish tavernas done up as genteel parlor rooms, can can girls, dance performances, jugglers, young people running in the streets with bayoneted rifles, incredibly good wine. The events scheduled for 'La Fratta dell’Ottocento' began on the evening of Thursday 9th September and continued for four days, with the stage being the entire historic centre and they were undoubtedly approved by the vast crowd that filled the winding little streets on this occasion.
I went home tired, with sore feet and big smile. I love this festa!
at Monday, September 13, 2010