The giostra del Saracino in Arezzo 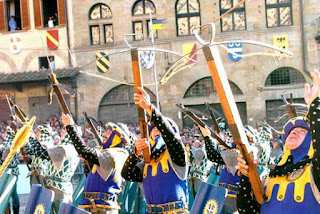 Every year an appointment with the past, history and wars returns: The Giostra del Saracino in Arezzo, running the last week of June and the first week in September.

The Giostra del Saracino 'Giostra ad burattum' finds its roots in Medieval times, it in fact born as a military training exercise, when Christian armies fought the wars of the crusades against Muslims to contrast expansion into Christian lands and domination of the city of Jerusalem.

With the passing of time it took on a meaning of officiality for the nobles. It took place in the occasion of visits by important figures or to solemnize specific civil celebrations. Today the Giostra del Saracino returns as a historical commemoration, on the occasion of the patron of the city: San Donato. The four neighbourhoods of the city participate in the Giostra, corresponding to the Gates of the city of Arezzo: Quartiere di Porta Crucifera, Porta del Foro, Porta Sant'Andrea and Porta di Santo Spirito. The neighbourhood of Porta Crucifera is distinguished by the colours red and green and its main seat is in Palazzo Alberti and it expands into the north east area of the city of Arezzo.

South east there is the neighbourhood of Porta Sant'Andrea with its white and green posters.
Porta del Foro, the third rione, is distinguished by colours yellow and crimson and its seat is in Porta San Lorentino, in the north west area of the city. And finally the neighbourhood of Porta Santo Spirito, in the south west area of Arezzo with seat in the Bastione di levante of Porta Santo Spirito, with colours yellow and blue. The Giostra del Saracino, organised by the Arezzo Municipality, starts in the morning with the 'lettura del Bando', reading of the competition paper by the Araldo, then followed by the re-evocative parade in 14th century costume with over 300 walk-ons and 30 horses, culminating with the "benedizione degli armati" (blessing of the armed) on the steps of the Duomo, performed by the Bishop of Arezzo.


The true tournament takes place in the afternoon when Piazza Grande is entered by the parade carrying the old gonfalons of the city by the orders of the Maestro del Campo. Then follows the display of the Sbandieratori (flag spinners) and the entry of the jousters who come in galloping on the 'lizza', the competition ground. At this point the Araldo reads the 'Disfida di Buratto' (a poetic composition dating back to the XVII century), there is a greeting of arbalesters and halberdiers and finally the authorisation by the Magistrates to run the Tournament and the singing, by the Gruppo Musici, of the 'Inno del Saracino'. Then come the jousters galloping, according to the order with which the knights will have to face each other, as decided the Sunday before the tournament, by a draw entrusted to the 'paggetti'. The objective of each knight armed with 'resta', that is the lance, is hitting an armoured automaton, the Saracino "Buratto, Re delle Indie" which represents a bludgeon armed Saracen. The pair of knights that will have totalled the highest number of points (which go from one to five) hitting the Saracino's shield, will win its neighbourhood the 'Golden lance', the Trophy of the Tournament.
at Thursday, September 02, 2010