Head for the hills to find value for money, fresh air and community spirit 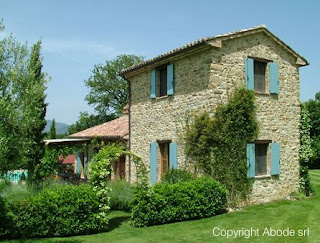 Sue Childs, a teaching assistant from Reigate, Surrey, has the best of both worlds (England & Italy-Umbria) with a 3,250-square foot apartment in a renovated 400-year-old olive mill at Rancale in Umbria. Her two-bedroom apartment, one of eight restored properties, was bought last May for £250,000. Now, it is valued at more than £360,000.
'Just because we are in rural Italy, that doesn't mean we can't get to lots of places,' insists Sue, who is in her late 40s. 'We have lovely vineyards and walled towns nearby.'
Her three children aged 23, 20 and 17, love taking photos of old railway stations and discovering small local bars and caf&Egrave;s. Umbertide is the nearest big town, a 15-minute drive, with ten restaurants and other services.

Getting there is simple too. Sue flies from Stansted to Perugia, a two-hour flight. 'If I leave early in the morning, I am in my apartment by midday.'
Paul Belcher, managing director of Ultissimo Ltd is selling the three remaining homes at Rancale from £240,000. 'The coast gets busy in peak season with tourists, but loses its soul in the winter. Restaurants are open year-round near Rancale, which has more of a community, he says. 'Often, the Italian coastline is spoilt,' says Roger Coombes from Cluttons Italy. 'During the Mussolini era, train lines were placed close to the beach and concrete motorways run alongside.'


He is selling a restored rambling five-bedroom farmhouse with an outbuilding that could be converted into a guesthouse. It's set among rolling vineyards and olive groves and has views towards Orvieto.
'The price is £770,000 and the owner will negotiate further for a quick sale. You need to spend about £85,000 to finish off the exterior and the garden, but this would be an investment that would bump up the value to more than £1 million.'
at Thursday, October 13, 2011