King of a castle at Palazzo Santiterzi 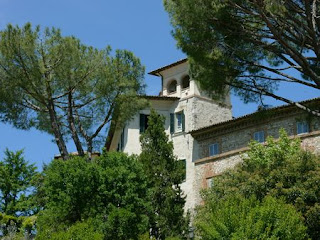 Thanks to Tony Blair and the Islington set, the summer holiday in Tuscany is probably doomed forever to the realms of cliché. But there is a way to escape the clutches of caricature. If the boutique hotel in Florence has become too predictable and the rustic villa in the countryside beyond parody, then why not defy every chattering class convention - and shack up in a palace.
Committed republicans may be put off by the very word, so perhaps we should speak instead of the palazzo. Ours was in the village of San Gemini, roughly half way between Rome and Perugia in Umbria, which, as everyone knows, is the new Tuscany. Or rather not in it, but towering over it: this palace was so palatial it had its very own tower, complete with belfry.

It was so vast, the natural impulse each time we headed up the narrow village streets towards the front door was to dissolve into giggles: surely all this cannot belong to us. The thrill of a spell of palazzo living is the sheer absurdity of it. You step through one of those doors-within-a-pair-of-wooden-gates on to a courtyard expecting to find a dozen neighbours, only to discover it's just you. You're like Julia Roberts in Pretty Woman, scampering from room to room marvelling at the lunatic extravagance of space.
It turns out the Palazzo Santiterzi, recently restored by the Grandjacquet family, could just as easily have been split into three capacious apartments. Instead they have kept it intact as a house, complete with ancient stone staircases and enough room to get genuinely lost. Navigating your way around requires serious orienteering skills, and more than a few self-created landmarks: if that's my beach towel on the landing, this must be the way to the kitchen.

Actually, there are three kitchens, to serve the seven bedrooms. (Or is it eight?) To prevent confusion, the best way to view the palazzo is in zones. There's the outside zone, complete with garden and swimming pool: small and shaded under stone arches, it's less a place to turn laps than a Roman bath.
Just around the corner there's a deck - also sheltered - featuring a hammock and, best of all, a long, long dining table. It could only mean one thing: the perfect space to re-enact those countless olive oil adverts British TV has sadistically taunted us with for decades. You know the kind of thing: sun-kissed, leathery-faced elders with grandchildren clambering joyfully on to their laps, gesticulating wildly as they sip red wine on a warm Italian evening - and served steamingly delicious rigatoni by the gorgeous young woman purporting to be their daughter. At last, that would be us! We would be that teeming, warm-hearted family dining alfresco night after night! (Sure enough, we pulled it off - once).
Of course, the outside zone has its own "summer kitchen" and bathroom. If the weather's good, you could stay there all day and forget about the rest of the pile that's yours, all yours.
To get to it, you have to walk through a kind of indoor courtyard-cum-cavern - which the Italian conservation authorities ruled must stay unaltered - before heading back inside the house proper. There you'll find the living room zone (enormous, with two bedrooms adjoining) or the kitchen zone (superbly appointed, with three bedrooms nearby) or the upstairs, TV-room zone (another mini-home, with its own kitchen and two bedrooms). It's less a holiday hideaway, more an Umbrian Millennium Dome.
Of course, the only way to make sense of such a laughably generous place is to share it. Don't invite one set of parents, invite both. And their friends. Soon you understand why the aristocracy went in for those month-long house parties ("We're summering with the Santiterzis this year"): unless they're full of people, a palazzo feels echoingly empty. These big houses need big crowds.

And if the family do come, it will be like no gathering that's gone before. Instead of the usual Christmas psychodrama - rows in the kitchen, tempers fraying in the queue for the bathroom - suddenly everyone will be getting on. Why? Space. In a palazzo, no one crowds anyone else. Everyone has a place they can retreat to - usually complete with its own shower, bath and reading room.
It makes the perfect venue for an extended family - or a Big Chill style adventure for a large gang of friends. The first people to rent out the Palazzo Santiterzi were a dozen Scottish women, for an extended hen night. Now that's the idea. (It makes financial sense, too: bring 12 people and the Palazzo costs about as much per person as a motel). There are other plusses to palace living, too. Unlike the classic Tuscan/ Umbrian holiday (remote villa, garden, pool), a palazzo comes with a village attached. If you're holidaying with young children, that counts as a major advantage: an afternoon gelato does not involve a trek down a dirt-track in the car, but a mere stroll with the push chair. Fresh bread or a quick top-up on the vegetable supply do not entail a day's outing but a morning errand. And you never forget which country you're in. "The house can't become England," says Simon Ball, one member of the Anglo-Italian family which runs the holiday rental firm Tuscany Now. So often villas become sealed-off little embassies of Blighty, but that's not an option if you're in the heart of a village. "You're surrounded by Italians," says Ball. "You walk out and it smells Italian."

You need to be careful, though. It's all too easy to start swanning around town like the local laird. Shopkeepers, promising to deliver groceries, ask where you're staying. When you whisper "palazzo" it's hard not to see a tiny bow of the head, and a move to the back room to unfurl the red carpet.
After all, you are, if only for a week or two, heir to centuries of history. The Palazzo Santiterzi has a rich lineage, dating back to the early 17th century. The great Canova used it as a summer residence - even doing the odd bit of home improvement: the cornices on the windows and towers are still said to bear the artist's signature. He sold it to the Santiterzi family who held on to it until the last war - when their aviator son Alessandro was shot down. Broken-hearted by their loss, the boy's parents bequeathed their home to the air force widows' association as a summer residence. When there were no more widows left, the Grandjacquet family bought it, restored it - and made it available to vacationers like us. But they left the bust of Alessandro by the front door, a reminder of a son who will remain "forever young". So to stay in the palazzo is to be at the heart of San Gemini. The present owners are the power behind the product that made the village famous - San Gemini mineral water. They are also the benefactors who restored one of its great treasures, the splendid 11th- century Abbey San Nicolo - whose stone interior, crafted in part from Roman ruins, now serves as a wedding venue most weekends.
That's not the only draw. San Gemini itself is a charming place, where the afternoon can be whiled away on the piazza as teenagers gossip in huddles and their grandparents do the same. Carlo Petrini, the founder of the "slow city" movement - aimed at curbing the hectic madness of modern urban living - came from here and the town has clearly taken his teaching to heart. Any slower and San Gemini would go backwards.
The ancient city of Carsulae is a short drive away, with ruins still visible, if mercilessly exposed to the baking heat. Do a quick tour there and you can reward yourself with lunch at Antica Car sulae - a gem of a restaurant, disguised as a roadside caff. The whiz behind their delicious bruschetta and mouthwatering fagioli? One John Paterson, a Brit brave enough to have come to Italy to open up a cookery school. But put aside the selling-sand-to-Sahara gags and sample his cooking: in a fortnight his was the best Italian food we ate.
The geography is kind, too. You don't need to be in the car more than an hour to reach a pristine little village like Montecastello di Vibio - which boasts the Teatro più piccolo del mondo, the smallest functioning theatre in the world - or a jewel of a city such as Todi. And Perugia remains one of those Italian delights, a university town of good restaurants, fine shops and world-class coffee. Even Rome and Florence are reachable (just south or north on the A1). And when you return from a hard day's tourism, you can always take a glass of cool white wine from the palatial fridge in one of your palatial kitchens, head to the top of the belfry and watch the Umbrian sunset - master of all you survey.
at Tuesday, November 22, 2011

Very nice. I was looking for a good list of real estate blogs, and it’s difficult to find quality blogs in the search engines without spending hours doing it. You have made my life easier today, and for that I commend you.