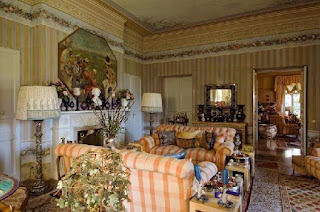 Villa Altachiara was built in 1874 by Henry Herbert the 4th Earl of Carnarvon on a promontory near Portofino. It was the home of the 5th Earl of Carnarvon, who is better known as 'Lord Carnarvon', Howard Carter's sponsor in the discovery of Tutankhamun's Tomb. Thanks to him the property became very popular. In 2001 the mysterious death of Countess Vacca Agusta made headlines all over the country and now the luxurious villa in Portofino where the countess lived her last hours before falling to her death from a cliff near her house is up for sale!

Built at the turn of the last century, the villa comprises 30 sumptuous rooms and it is surrounded by a huge beautiful park (35,000 square metres in size).
The house also features a swimming pool and private heliport. From its luxurious rooms furnished with antiques one can enjoy one of the most breathtaking views of the Italian Riviera. Villa Altachiara was put up for sale in 2009 for €34m. It is a very posh villa with a mundane trail of owners- On the death of the 5th Earl, the villa passed to one of his other sons Aubrey Herbert.
By 1933 Villa Altachiara was rented by Elizabeth C Patterson, who made it available to the Indian mystic Meher Baba and shot the film 'Western Disciples Visit India and Portofino'.

The house was bought by the beautiful Countess Francesca Vacca Agusta who disappeared on January 8th 2001. Did she fall? Was she murdered? It was 3 weeks before her body was found, washed up 200 miles from Portofino on the French coast. There were no signs of blood on the cliff face, but reportedy blood was found on the terrace and divers retrieved her ripped bathrobe from the sea of the cliffs. The autopsy concluded that there was no water in her lungs and that she had died of a serious head injury sustained before she entered the water. The verdict was that her death could have been caused by 'accident, suicide or homicide'. There are reports that she had been drinking heavily on the evening of her death so an accident would seem plausible; however, the shape of the cliffs means she would have hit rocks at least three times on her descent and there was no evidenceof blood on the cliffs. Some observers believes this proves she neither fell, nor was pushed but was murdered on the terrace and then her body was deposited in the sea.

Her brother believes she was murdered and her lawyer, Ennio Amodio, said: 'In light of what the French authorities have ascertained, the theory of homicide becomes more likely. The injuries to the head may have been caused by being struck and not by a fall.' Villa Altachiara is a beautiful seaside retreat, with elegant Victorian interiors, perfectly restored, open in all their bright beauty.
This is an exceptional house on the promontory above Portofino, one of the most panoramic spots on the Tigullio Gulf. Villa Altachiara is one of the loveliest oasis of charm in the world!
at Friday, June 18, 2010

Who wrote this article and how do you know about the movie made by Elizabeth Patterson?

As the biographer of Almina, 5th Countess of Carnarvon, of Tutankhamun fame, may I add a few small footnotes. This large house “Alta Chiara “ was of course the Italian version of the name of the family seat in England at "Highclere,"

Villa Altachiara was indeed a scene that sparked many events in the Carnarvon family. George Herbert, the 5th Earl’s life long frailalties, genetic and self inflicted, including the ravages of diseased skin and lungs were somewhat relieved by the Italian climate of Portofino. He often recuperated there, until his step mother, Elsie inherited the property from her husband, the 4th Earl in 1890. George never warmed to Elsie, although her letters show a strong motherly tone, even towards him in their later years. Carnarvon was ill fated and died at only 58, after the infamous mosquito bite. Elsie’s guests at Portofino were numerous and covered eminent folks from the world of politics, religion (mainly Catholic, of course) and science. Her own death at her beloved Villa of Altachiara overlooking the Mediterranean was what she would have most craved. She had just finished her day’s correspondence in bed. She had the notion of going out into enjoying the rays of the winter sun (it was 1 February) and suddenly falling back lost consciousness and did not wake up again.

Carnarvon’s half- brother, Aubrey ( one of the two sons of Elsie and the 4th Earl ), famously declared once that “ if a man can have a second country, Italy is my second country.” Aubrey, whom Almina adored, did not reach old bones and died a few months after Carnarvon. His widow, Mary Herbert, succeeded to Villa Altachiara and the site
Became a veritable literary colony for poets, painters and writers, including Evelyn Waugh, Alfred Duggan, Peter Acton and Brooke Astor.


William Cross, FSA, Scot: Author of " The Life and Secrets of Almina Carnarvon" a candid biogarphy of the 5th Countess of Carnarvon of Tutankhamun fame.