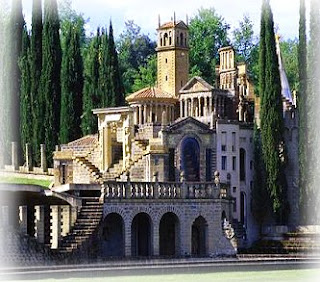 The site at Scarzuola started out as a simple wooden shack in the Umbrian countryside, a tranquil, remote residence for the wandering St Francis, south of Perugia. It was here that in 1218 he planted a bay tree and a rose bush and then a fresh, bubbling spring promptly erupted. Over time St Francis’s humble dwelling grew into a monastery and today in the church’s apse you can still see a 13th century fresco of the saint levitating.

In 1956 the famous Milanese Architect, Tommaso Buzzi acquired the eight hundred year old complex at Scarzuola, by which time it had fallen into decay and was in much need of repair. Buzzi set about creating his own perfect, if not surreal, city around the grounds of Scarzuola, incorporating the original buildings; he added many ingenious designs and touches of his own.

The result is an eccentric and fascinating city of dreams that expresses Buzzi’s many influences, classical and renaissance references as well as surrealistic and fanciful juxtapositions. His wonderfully innovative folly is a combination of the existing ecclesiastical buildings from the convent, which became the sacred city and his own secular works that make up the Buzziana. This is complete with seven theatres, a tower of Babel, an acropolis and a maze of staircases.

Buzzi populated his landscape around Scarzuola with symbols, poetic passages and enigmatic icons, all full of personal meaning and mystery. Everywhere you look there are sculptures, fountains and pools all elaborately decorated. Visitors are taken down tunnels into Cypress filled glades, up winding staircases and onto panoramic terraces; the walker faces constant choices, poems and monsters in their entertaining exploration. The whole experience at Scarzuola is a trip into the creative genius of Buzzi and the references in which he found importance.

After his death in 1980 Buzzi’s cousin, Marco Solari took over management of the site and today he shows tourists around his uncle’s magical world. In Scarzuola, Buzzi has left us with a marvellous collection of buildings, part childhood puzzle and part intellectual game but either way a fantastic vision in the landscape. Scarzuola is not open directly to the public but visitors interested in wandering around the interesting grounds of Tommaso Buzzi’s fabulous creation can arrange an appointment. The site of the Sacred City and Buzziana can be found near the village of Montegiove, Montegabbione in the Umbrian hills south of Perugia.