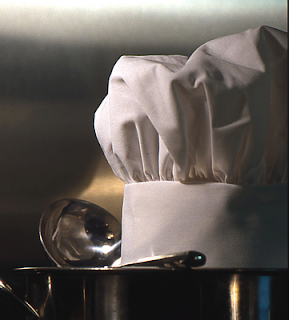 My dear friend the journalist Susan Chenery, discovers the consuming passions of the restaurateurs at Casa Vissani.
The great chef is almost a parody of what you might expect an Italian chef to be: large, operatic, prone to dramatic gestures. It is like listening to an aria that gets louder and louder - he claps his hands, stretches his arms wide as if he is on the stage at La Scala.

"For me, cooking is from the heart," Gianfranco Vissani booms. "There are so many feelings and emotions and colours, it is like a painting that takes hours, like Picasso, then you have to create a Rembrandt. But where a painter's work stays, mine is gone."

If it was not for the exhaustion etched into his face, the dark circles under the eyes common among chefs operating at the highest level, he would be a comic-book chef.

There have been rumours of flying plates, which Vissani, a big, powerful man in expensive shoes, denies. "I have a heart, so I don't throw plates," he says. "We are a family here."

We set out in a state of delicious expectation but we're somewhat frazzled by the time we arrive very late at the two Michelin-starred Ristorante Casa Vissani, near the Umbrian town of Orvieto, having taken a wrong turn and gotten lost on the way.

Vissani has been described by Food & Wine magazine as one of the "hottest chefs alive", part of a generation of restaurateurs as "glamorous as rock stars". Italy's L'Espresso magazine named Casa Vissani the best restaurant in the country. In a food-obsessed country where daily life revolves around the table, this is really saying something.

His theatrics, even for Italy, are well known from his television programs, newspaper columns and books - and from his celebrity and political friends. You don't keep a man like this waiting.

"I am not interested in that," he says of the "hottest chef" label. "That is not important. It is the person who counts and I am still the same person." Then he waves his arms around wildly and bellows, "Actually, people who say that can f--- off."

Casa Vissani is not where you go for traditional Umbrian food, which can be bland, unimaginative and conformist; Umbrians can be rigid about their food and suspicious of change. "A lot of Italian people love me and a lot of Italians hate me," Vissani says with some relish.

Although he uses "only pure" Umbrian produce, it is restructured and interpreted in a way that is pure invention.

He is passionate about his ingredients. "Genetically modified food will kill people," he says. "Each ingredient is important, each one has a story and you have got to be able to taste every ingredient."


Vissani's voice moves up several octaves. "It doesn't matter how much it costs, it has got to be the best with no chemicals ... We must respect every living thing and cook it in a way that is right for it, at the right temperature. We give ourselves to the people who come here. We make passionate love in the kitchen every night."

We drive up to a daunting locked gate and we're buzzed in. Beyond lies a low-slung building beside Lake Corbara with walls covered in jasmine. This was once a summer seafood shack owned by the maestro's father. It already looks expensive, as a small battalion of black Armani-clad staff ushers us in.

The kitchen can be seen from the dining room through windows dressed with picture frames, wherein white-hatted chefs glide in clusters, like a living painting. The decor is beige and formal.

"Vissani is a volcano of ideas," our waiter says. "He writes the recipes without ever tasting them because he understands the basic ingredients. When he explains a dish, he is discovering it in that moment. He never repeats the same dish. It is continual change."

And so, to the food. We order a tasting menu, which changes every month. The bread is made of acorn flour; the raw sea bass is infused with broom flowers and sits in walnut sauce; there's lettuce jelly; lobster with liquorice and pecorino paglierino foam. Vissani hovers at the table over the baby pork - "It has been on the grill, in the oven for hours and then a hair dryer" - with a coffee sauce.

Each dish is a series of small orgasms of flavour. In the middle of this procession, though, is a lasagne of rice flour, with puffed rice with caviar and broccoli with chocolate drops, to which I take an irrational dislike.

An impressive array of local cheeses, the piece de resistance, arrives in a large wooden box at the table. Each cheese has been turned into a cupcake: pecorino with plain chocolate; with liquorice; with rose petals.

Late in the evening, as we sample the sixth dish, Vissani settles in an armchair and shows us an antiquarian book of recipes in Latin, written by chefs in pagan pre-Roman times. These were the days when diners gorged themselves so much they had facilities set up in the next room, so they could purge and keep eating. Vissani regularly translates from it. Another book from the 16th century contains the recipes of a chef to the popes and Catherine de Medici.

Clearly, he is drawing on ancient recipes. "My secret is the preservation of ancient flavours," Vissani says.

By now it is very late and we are starting to feel like part of the Vissani family. The chef's son, Luca, runs the restaurant. Vissani has his feet up, smoking, expounding.

And then the bill comes and the tidal wave of warmth and bonhomie turns into a financial tsunami. It is almost €500 ($660), which, admittedly, includes a bottle of 2000 Lungarotti San Giorgio. Was it worth it? Well, it took 30 chefs to make those cheese cupcakes.

During the global financial crisis, Vissani realised this type of dining was beyond most people, in a country where the average wage is €1500 a month. As well as the "big offer" tasting menu at €155 a person, there is a "small offer" tasting menu at €100 and five-course tasting menus three days a week called "L'hour" (1-2pm, €30 a person for lunch and at 8.30-9.30pm, €50 a person for dinner. I probably should have gone for that.

It is really an amazing information and gives the lot of knowledge about real estate. It is the actual thing that i was looking for.

Houses for Sale in Northern Virginia