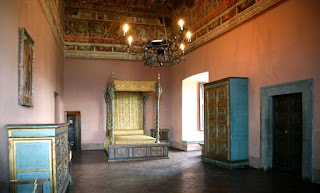 Italy’s castles provide accommodations embedded with history. It’s one thing to tour a castle which is like touring a museum and quite another to actually wake up in one, to dine in one and to be able to tell friends about your experience. Castles are a great place to stay for history buffs as well as the hopelessly romantic.
In fact, one of Hollywood’s most romantic marriages took place in an Italian castle. Tom Cruise and Katie Holmes were married in Castello Odescalchi in Bracciano on the southern shores of Lake Bracciano in the Italy’s Lazio region. Recently, it was the venue chosen by Croatian heiress Petra Ecclestone to businessman James Stunt. The reported $5 million wedding ranks it ahead of Kate Middleton and Prince William’s nuptials as well as those of Kim Kardashian and Kris Humphries.

Castello Odescalchi is about one hour by car from Rome and can also be reached by a commuter railway line that runs between Rome and Viterbo. Castello Odescalchi is one of the most beautiful feudal mansions in Europe. Although it does not operate as a hotel, but rather as a museum, it offers tours of the castle and is a spectacular venue for weddings and receptions. The bride and groom can spend their first night there.
Italy has some 200 castles including those privately owned and sometimes open to the public for special occasions. Of course, not all of Italian castles have overnight accommodations.

Italy’s Umbria region is home to the Monterone Castle that has guestrooms and other hotel amenities. It is located just under two miles from the historical city of Perugia, which can be reached via train from Rome. Monterone dates back to the Thirteenth Century and is believed to have a Knights Templar connection that made it a convenient stop over for knights enroute from Rome to Perugia. The Templar church of San Bevignate is just a mile away.

Accommodations at the Monterone Castle have all of the conveniences of a modern hotel, yet each guestroom is steeped in historical stories and artifacts. If you book the Dragon Room you should be prepared for an additional occupant, because it is said to be the abode of the castle’s ghost.
Guests will enjoy the property’s expansive terraces with views of the Umbrian countryside and a lovely rose garden with some two hundred roses. They can also relax by the pool, in the Jacuzzi or enjoy the wellness area. Just outside the castle walls guests can stroll through a tree studded park shaded with oaks and olive groves. When you’re hungry you don’t have to dash into Perugia. There’s a Michelin star restaurant in the castle that offers, in addition to its regular menu, special tasting menus and wine pairings.

Monterone Castle is the perfect place to stay for exploring the ancient city of Perugia, which dates back to the year 205 BC when it was known as Perusia. Today it is a vibrant cultural center known for art and music and chocolate as well as Etruscan history. It is home to the annual Umbria Jazz Festival, the largest jazz festival in Italy (usually held in July) and the Eurochocolate Festival in October. Likewise, it is possible to also visit Assisi and Deruta. Getting to Perugia from Rome, about 100 miles away is best by train or by car. The journey from Rome to Perugia offers a beautiful drive through scenic countryside.
at Sunday, December 11, 2011