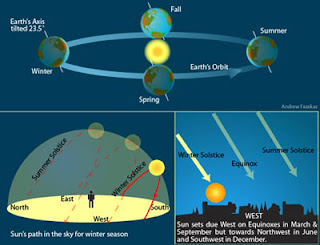 The Winter Solstice has been celebrated in some way or another for thousands of years. In the Northern Hemisphere, the winter solstice is often connected with various religious holy days. Pagan religions associated the winter solstice with significant life changes, intricately linked with the universe and fates that determined the future and effected those lives.
This significance can also be found in the Southern Hemisphere, where the Winter Solstice takes place in June. For science-enthusiasts the winter solstice is an interesting astronomical occurrence that offers an opportunity to celebrate what we have managed to learn about the cosmos and affords us an excitement of space exploration and the complexity of the universe. Winter Solstice marks that day when there is less daylight than at any other time of the year. We commonly refer to it as the shortest day. The Summer Solstice, on the other hand, is the day with the most daylight (the longest day).
The exact date and time of the winter solstice, while always occurring within a day or two of December 21, changes from year to year because of the difference between a calendar year of 365 days, and the solar year of 365.26 days - the exact time it takes for the Earth to make one trip around the sun.
You are invited to celebrate the winter solstice with poetry and song in Assisi. Bring a favourite winter poem to share, if you like, or simply come and listen in candle-lit dark and enjoy the peaceful quiet of the house where we are meeting.
at Tuesday, December 20, 2011