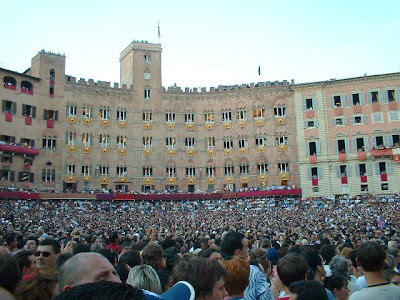 The second edition of the famous horse race is nearly upon us, with the emotions undoubtedly already ramping up in the beautiful Tuscan city of Siena in preparation for Saturday's race. The August 16th race has been run since 1774, having been added to the original race schedule of July 2nd, itself a date in the Senese diary since 1656. The races create some of the strongest emotions I have seen in any sporting event, with losing supporters crying real tears and the winning contrada celebrating as if Italy had just won yet another World Cup. Several thousand spectators cram themselves into the stunning Piazza del Campo, which is surrounded by some of the most prime real estate in Siena. Owning an apartment or a whole palazzo on the main square of Siena must be considered one of the most exclusive addresses of any property in Tuscany. A seat on one of the many balconies surrounding the Piazza del Campo can set you back as much as €1,000 or more, unless you are lucky enough to have a friend who has bought a property there already. Considering the horse race itself only lasts 90 seconds, that makes it a pretty expensive seat. Then again, if you have bought property in Siena, the Palio makes it a very good investment indeed...
at Monday, August 11, 2008