Easter in Italy- Italian Festivals and Celebrations for Holy Week 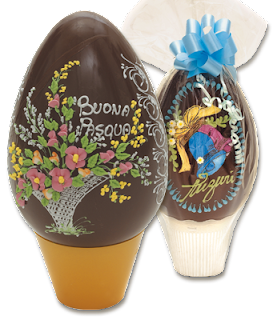 For some foreigners it may be hard to understand how important Easter is for Italians, so if you are in Italy for Easter, you will find a lot of interesting Easter celebrations. Easter, Pasqua, in Italian, is the second most important religious holiday after Christmas. From a strictly religious point of view it is even more important, in fact Easter, being the celebration of the resurrection of Christ, is the celebration of the mystery that is the basis of the Christian faith. Easter in Italy has its share of rituals and traditions and the Monday following Easter, Pasquetta, in Italian, is also a holiday throughout Italy. While the days before Easter include solemn processions and masses, Easter is a joyous celebration.
Lent (Quaresima): marks the forty days of fast and abstinence before Easter. Lent is marked with the Feast of St. Joseph (Festa di San Giuseppe) on March 19th and Palm Sunday (Domencia della Palme), in which palms and olive branches are blessed by the parish priest and given out to the congregants. Many churches still follow the tradition of having the priest knock three time from the outside of the closed church doors to symbolise Jesus' entry in to Jerusalem.
The local parish priests for sure go round knocking on the neighbourhood's door. It is traditional for priests to visit their parishioners and bless each home with the Easter Blessing.
Good Friday (Venerdì Santo): solemn religious processions are held in many towns on the Friday or Saturday before Easter and sometimes on Easter Sunday. Many churches have special statues of the Virgin and Jesus that play a big part in the processions. The statues may be paraded through the city or displayed in the main square. Parade participants are often dressed in traditional ancient costumes. Olive branches are often used instead of or along with palm fronds in the processions and to decorate churches.
Some towns, such as Montefalco and Gualdo Tadino in Umbria, hold live scenarios during the night of Good Friday or plays enacting the stations of the cross.
Holy Friday is also often marked in the churches with a ritual washing of the feet, with the priest symbolising the role of Jesus, and twelve church members symbolising the role of the apostles. While Easter mass will be held in every church in Italy, the biggest and most popular mass is held by the Pope at St. Peter's Basilica. On Good Friday, the Pope celebrates the Via Crucis in Rome near the Colosseum. A huge cross with burning torches lights the sky as the stations of the cross are described in several languages. At the end, the Pope gives a blessing.
Haven't we all wondered why Good Friday is 'Good'? Never mind that, just remember that for me it's followed by 'OK Saturday', the woefully neglected Easter Week day. So let's celebrate it!
Easter Saturday food blessing celebration: Italian families often go the church with a basket full of food (bread, salt, wine, egg - usually painted etc). The baskets are then blessed by a priest.

Easter Sunday begins with a bang in Florence - quite literally! The three hundred year old traditional 'explosion of the carte' (Scoppio del Carro) has its roots in the pagan ritual of ensuring a good harvest" and is now considered a bringer of good luck for the city of Florence.
Since Easter is the end of the Lent season, food plays a big part in the celebrations. Traditional Easter meals vary from region to region, but eggs and roasted lamb are common elements everywhere. Eggs represent life, fertility, and renewal, all of which are essential symbols of Easter. Dyed eggs grace many Easter tables, and eggs are often found in soups and in a traditional Easter pie (Torta Pasqualina). Roasted lamb, as a symbol of birth and the Shepard, is a traditional main course. Chocolate bunnies are not common, but beautifully decorated chocolate eggs are a traditional Easter treat and gift! Chocolate eggs are a symbol of Easter even for non religious people. Everybody gets an egg for their dear ones. Most chocolate eggs are industry produced. Every serious cake shop produces finely hand made eggs, using the best chocolate they can get. Inside each egg is hidden a small gift. Or not so small, depending on how luxury the egg is! It is also possible to request a custom made egg, selecting in advance the gift it will contain. Many engagements began in Easter, with an engagement ring hidden in an egg.
The official Easter cake is the Eastern Dove (Colomba) that represents peace.
Easter Monday - La Pasquetta

On Easter Monday, some cities hold dances, free concerts, or unusual games often involving eggs. In the Umbrian hill town of Panicale, cheese is the star. Ruzzolone is played by rolling huge wheels of cheese, weighing about 4 kilos, around the village walls. The object is to get your cheese around the course using the fewest number of strokes. Following the cheese contest, there is a band in the piazza and of course, wine. Easter Monday is a time to gather with friends and have fun.
at Monday, March 29, 2010