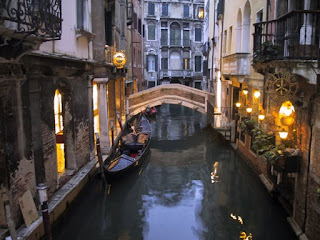 It seems impossible that one week ago I had just arrived in Venice by train and was bumping my trolley up and down the bridges between Santa Lucia station and the holiday apartment I had rented. It was located in a 17th century building in the Cannaregio district, the old ghetto, near the Ca d'Oro. At 8am, with no foot traffic and no bags to lug, it might have been a 10 minute stroll away. Now, though, stumping up and down those annoying bridges, it felt like an hour. Really! After having visited Venice in 1989 on a school trip, how could I have forgotten that all those picturesque bridges crossing canals every few hundred feet are built with about 10 steep steps up and down each side?
Once I survived the wide commercial gauntlet of Strada Nuova, I found my alley easily enough -- Calle delle Vele, Street of the Sails -- and hauled my luggage over one final bridge to my apartment’s address. When I rang the bell Davide answered, the house caretaker whose family has lived there for hundreds of years.