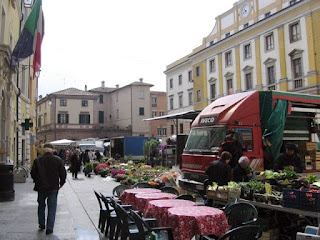 I must say, Umbertide has proven to be a far nicer place than I've always thought. Yeah, I’m Umbrian but I'm pretty much a hill-town snob – living in Perugia. However while Umbertide (the town) is boringly flat, the topography of the Comune (township) of Umbertide is nicely varied. The Comune, comprised of 12 frazioni (towns and their surroundings – altogether around 15,000 souls in 2003), covers about 77 square miles. The Upper Tiber River runs through it, and tributaries like the Niccone and the Reggia rivers flow through fertile little valleys between high rolling hills. There’s a pint-sized railroad (the FCU line -- if you've ever dealt with dismissive Italian railway clerks, you can imagine what that brings to mind) that runs merrily from Perugia to Sansepolcro, stopping at Umbertide about mid-way. From its comfortable, colourful carriages you see traffic sailing along the parallel highway some distance away, huge old stone farmhouses knee-deep in surreal yellow fields of flowers, and curious high stone buildings bristling with vents for drying the local tobacco; town after town with well tended backyard gardens, featuring lilacs, iris, beehives, trellised vines just leafing out, and blooming fruit trees; smallish milky jade-green rivers under the trestles, flowering hawthorne hedges, fattening horse-chestnut leaves that will soon block the views completely; multigenerational laundry dancing with the wind on clotheslines everywhere; a whole lot of new apartment buildings being built along the busy roads; still holding the valley, wooded summits 'crawling with castles,'; abandoned rural train stations disappearing under a scrim of graffiti, most of it declaring that someone loves someone; old men digging in their masterfully productive and tidy vegetable gardens, bent nonnas in brightly patterned aprons feeding their chickens; but also from these rails you see the region’s industrial backbone- lumber yards, factories and distribution points for 'machine tools, farm machinery, textiles, packaging material, and ceramics'. The swift little trains whistle a cute little toot-toot now and then, and old men standing beside the rails, holding their grandchildren's hands, smile and wave as we roll by.
Like most Italian little towns, Umbertide has had several different names and incarnations and seen a whole lot of carnage. Nicely situated where the Tiber meets the Reggia river, it was an important trading center going back to Roman – even Etruscan – times. Hannibal passed nearby in 217 BC when he savaged the village of Lisciano Niccone for giving aid to survivors fleeing his terrible ambush and slaughter at Lake Trasimeno, whose eyewitness accounts tell us the lake turned red for 3 days with the blood of some 15,000 Roman soldiers -- the first Roman defeat. Totila destroyed the Roman trading town itself in the 6th century; it was rebuilt in about the 8th century, but endured 'perpetual pillaging' till Perugia took over in the 12th century; was wrecked again in 1413 thanks to the Duke of Naples; then spent some centuries under the Papal States till joining the newly formed Kingdom of Italy in 1860. Umbertide proper boasts a 14th century castle with a 40 meter high tower, a 16th century octagonal church, a heroic naked-warrior statue that must have been Fascist, and the ugliest 20th century church you can imagine, known familiarly as the 'fire-station church' for obvious reasons. Not what you’d call a tourist town, and for that many locals are grateful.
Some of what Umbertide town DOES have is a hopping Wednesday morning marketplace, a sport-fishing stretch of placid river that is even wheel-chair accessible, a fine physical rehab center, hardware and garden and stationary stores, fabric shops, a kebab grill, an actual laundromat (still rare as hens' teeth here in central Italy), at least 5 supermarkets larger than your living room, two Internet caffes, an electronics shop run by an efficient and helpful lady, several good inexpensive coffee bars filled with geezers playing cards and shouting alarmingly at one another as they no doubt have since grade-school, a railway station whose ticket window grudgingly opens about 10 minutes before each mini-train is due, a hole-in-the-wall, a nameless panificio that bakes the best (and cheapest) bread I’ve ever had, a lot of totally uninteresting apartment buildings that however all have balconies, some handsome "modern" houses decorated with fine ironwork, unusually tree-lined streets, and a parking style I can only think of as 'King Kong is coming' – cars parked every which way, mostly with at least one wheel up on the pavement, as if they’ve just been hastily abandoned.
Living in Italy offers a not-to-be-ignored lesson in being 'mindful'...
at Thursday, March 18, 2010